“I knew the smell of death well enough. But here the sweetness of decay was tainted with something else, something new and different. It was a curious, moist smell, a smell that spoke of the ooze and slap of water, of gurgling wet spaces and the sticky yielding mud of low tide.” 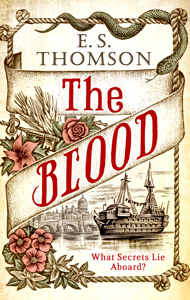 Summoned to the riverside by the desperate, scribbled note of an old friend, Jem Flockhart and Will Quartermain find themselves on board the seamen’s floating hospital, an old hulk known only as The Blood, where prejudice, ambition, and murder seethe beneath a veneer of medical respectability.

On shore, a young woman, a known prostitute, is found drowned in a derelict boatyard. A man leaps to his death into the Thames, driven mad by poison and fear. The events are linked—but how? Courting danger in the opium dens and brothels of the waterfront, certain that The Blood lies at the heart of the puzzle, Jem and Will embark on a quest to uncover the truth. In a hunt that takes them from the dissecting tables of a private anatomy school to the squalor of the dock-side mortuary, they find themselves involved in a dark and terrible mystery.

“The lips had been darned closed with six long, black, stitches. Clumsily executed, they gave the face a crude deaths-head appearance, like a child’s drawing scrawled upon a wall…” 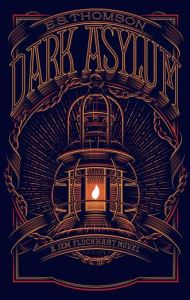 1851, Angel Meadow Asylum. Dr Rutherford, principal alienist, is found dead, his head bashed in, his ears cut off, his lips and eyes stitched closed. The police direct their attention towards Angel Meadow’s inmates, but to Jem Flockhart and Will Quartermain the crime is an act of calculated retribution, rather than of madness.

To discover the truth Jem and Will must pursue the story through the darkest corners of the city – from the depths of a notorious rookery, to the sordid rooms of London’s brothels, the gallows, the graveyard, the convict fleet and then back to the asylum. In a world where guilt and innocence, crime and atonement, madness and reason, are bounded by hypocrisy, ambition and betrayal, Jem and Will soon find themselves caught up in a web of dark secrets and hidden identities.

“The object I drew out was dusty and mildewed, and blotched with dark rust-coloured stains. It smelt of time and decay, sour, like old books and parchments. The light from the chapel’s stained glass window blushed red upon it, and upon my hands, as if the thing itself radiated a bloody glow.” 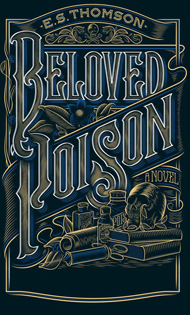 Ramshackle and crumbling, trapped in the past and resisting the future, St Saviour’s Infirmary awaits demolition. Within its stinking wards and cramped corridors the doctors bicker and fight. Ambition, jealousy and hatred seethe beneath the veneer of professional courtesy. Always an outsider, and with a secret of her own to hide, apothecary Jem Flockhart observes everything, but says nothing.

Six tiny coffins, inside each a handful of dried flowers and a bundle of mouldering rags. When Jem comes across these strange relics hidden inside the infirmary’s old chapel, her quest to understand their meaning prises open a long-forgotten past – with fatal consequences.

In a trail that leads from the bloody world of the operating theatre and the dissecting table to the notorious squalor of Newgate and the gallows, Jem’s adversary proves to be both powerful and ruthless. As St Saviour’s destruction draws near, the dead are unearthed from their graves whilst the living are forced to make impossible choices. Murder is the price to be paid for the secrets to be kept.”

BELOVED POISON is published by Constable on 4th March 2016. It is Constable’s lead debut crime fiction title for 2016.

Set in 1857, between England and India, The Peachgrowers’ Almanac (A Proper Education for Girls) is a rollicking novel about feisty women, the devotion of sisters and the Victorian obsession with empire, experiments and photography.

The peachgrowers of the title are twins with a passion for botany. Lilian, in mysterious disgrace, has been married off to a dreary missionary. Alice is left at home, curator to her father’s monstrous collection of artefacts, under the watchful eye of the malevolent Dr Cattermole.

The Peachgrowers Almanac is a dazzling debut. Tongue-in-cheek and inventive, comic and horrifying, it illuminates the dark heart of Victorian hypocrisy and selfishness, yet at the same time is engaging, very funny and utterly unputdownable.

The Peachgrowers Almanac was published in paperback in 2009 with the new title ‘A Proper Education for Girls’.

Monty and Ada are old friends. They worked together on the frontline in Belgium where Monty was a nurse and Ada drove ambulances – like the devil. And now, Bleakly Hall Hydropathic has brought them together again.

Monty has just arrived to look after the gouty residents – there to take the Hall’s curative waters via nozzle, douche and jet – and Ada is the maid and driver. For all those at Bleakly, the end of the Great War has brought changes. Not all of them good.

Monty has a score to settle with the elusive Captain Foxley; Ada misses her wartime sense of purpose; the Blackwood brothers must reinvigorate Bleakly for a new era; Foxley has his own particular ways of keeping his ghosts at bay. But with the crumbling, rumbling hydropathic threatening to blow it’s top, what will become of those thrown together in it’s bilious embrace.

This wonderfully original novel brings together an irresistible cast of characters – including Bleakly Hall itself – in the wake of one of history’s great tragedies. To powerful effect, it combines fizzing comedy with a deeply moving look at the aftermath of war.